On May 22, 2014, we attended a CLE called “Policing and Enforcing Intellectual Property in Social Media” hosted by the IP Section of the State Bar of Georgia. The panel featured Lindsey Corbin (Z5 Consulting), Bakari Brock (Lyft, formerly Twitter, Google, and YouTube), and Todd Williams (Turner Broadcasting). It was moderated by Joe Staley (Kids II, Inc.) and Matt Smith (Innovolt).

The panelists spoke on a variety of issues, including protection in foreign countries, gTLD’s, and  how the law is trying to catch up to how quickly technology is changing. It was a great event followed by the IP Section’s 50th Anniversary Event. 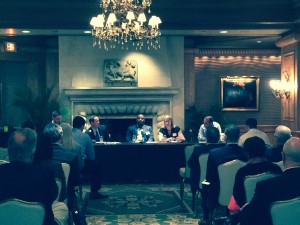