Does Copyright Law Let a Monkey Sue Over His Selfie? 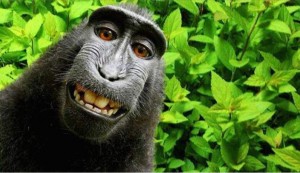 Naruto, the macaque, is a pioneer to the animal world because he is the first animal to take a selfie. Dating back to 2011, on the Indonesian island of Sulawesi, Naruto snatched photographer’s, David Slater’s, camera and took a selfie. This selfie has stirred widespread debate over who owns the rights to this photograph. People for the Ethical Treatment of Animals (PETA) sued on Naruto’s behalf claiming ownership rights to the selfie. Slater, on the other hand, claimed ownership of the selfie because it was taken with his camera. U.S. District Judge William Orrick III ruled that copyright law does not extend its protection to animals. Nevertheless, this is a landmark case because for the first time in history an animal’s right to sue for property rights, as opposed to being labeled as property, has arisen.

PETA, on behalf of Naruto since monkeys do not have standing to bring a lawsuit let alone the ability to talk, sued Slater. The organization asserted Slater could not hold copyright in the selfie because he was not involved in its creation. PETA sought monetary damages, claiming all money will go to Naruto, and a ban on the sale of the selfie.

Copyright laws provide that if there is an author, there is a copyright. This poses a problem for Naruto because works created by a non-human are not subject to copyright. According to Clause 313.2 from the United States Copyright Office, “This office will not register works produced by nature, animals or plants.” This clause specifically lists “a photograph taken by a monkey” as an example of a work that is not registerable because it lacks human authorship. Naruto, being an animal, foreseeably had difficulty acquiring a copyright in his selfie even though he arguably is the author of the work. Despite our sympathy for Naruto, United States copyright laws would need to be revised in order for courts to lawfully rule in favor of Naruto.